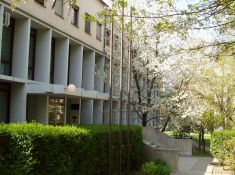 The Department of Geophysics provides an education in geophysics (meteorology, oceanography, seismology and geomagnetism with aeronomy) and leads in national and international research projects and programs integrated into educational process. Scientific activities include research of earthquakes, physical properties of the Earth's crust, physical processes in the Adriatic Sea, weather, climate, interaction of physical phenomena in the atmosphere and the sea, physico-chemical changes in the atmosphere related to climate changes and man-made activities.
The Department of Geophysics consists of the Andrija Mohorovičić Geophysical Institute, the Seismological Survey of the Republic of Croatia (since 1985) and the Central Geophysical Library (established in 1861).

The origins of the Department of Geophysics date back to the 1861 when the first organized meteorological measurements in Croatia were carried out. In time, activities gradually broadened, now including physics of the atmosphere, physics of the solid Earth and physics of the sea. Already in 1862 weather reports are being published in Zagreb, and by the end of the 19th century Andrija Mohorovičić, the head of the former Geophysical Institute, publishes the first weather forecasts. At that time Geophysical Institute was responsible for the macroseismic data collection, and the first seismographs were obtained soon afterwards. Mareographic station in Bakar has been recording level of the Adriatic Sea since 1929. As the network of meteorological stations increased, it was separated from the Geophysical Institute, which resulted in foundation of the Meteorological and Hydrological Service of Croatia in 1947, while the Institute becomes a unit of the Faculty of Science. The solar radiation is measured at the Puntijarka Observatory since 1959. Measurements of standard meteorological elements (pressure, air and soil temperature, precipitation, wind speed and wind direction, relative humidity, global and diffusive radiation) and UV radiation have been carried out by automatic meteorological station at Horvatovac since 1987 and 1998, respectively. Andrija Mohorovičić Geophysical Institute publishes scientific journal Geofizika. The journal is referred in a number of world-wide bibliographic databases, such as ISI Web of Knowledge, Scopus and others.

Seismological Survey of the Republic of Croatia performs macroseismic and microseismic data acquisition and processing. The instrumental data are provided by the network of 17 seismological stations and 7 accelerographs deployed on the Croatian territory. Its task is to observe and analyze vibrations of the ground caused by local as well as world-wide earthquakes. Based on the earthquake recordings the information about strong earthquakes is distributed to local population and professional expertise is provided to builders, insurance companies, etc.

The Central Geophysical Library is the oldest faculty library in Zagreb. The Library stores over 5000 books and textbook titles, 20000 journal volumes and manuscripts, and it covers all geophysical disciplines: meteorology, oceanography, seismology, geomagnetism, and some contiguous areas (astronomy, physics, mathematics, geology, geography, etc) as well.