Beginnings of university-level teaching of physics in Zagreb reaches back to 17th century. The Jesuit Order has started a course in Philosophy in 1662 corresponding to the courses already existing in other Jesuit institutions for higher education in Europe. During the first year of studies were held lectures on Logic and Mathematics, followed by Physics and Metaphysics during the second and the third year, respectively. The first professor was Stjepan Glavač (1627-1680), and Physics was lectured for the first time in 1664. The teaching of physics continued in the same intensity even after 1669 when the Jesuit Academy in Zagreb has obtained the rights and privileges as a University.

Complete reorganization of the Academy in Zagreb in 1776, including courses of physics, came as a result of a new program, structure and title of Zagreb Royal Academy of Science. At that time was established the first Physics Cathedra (Katedra za fiziku). Professor Antun Kukec was appointed as the first professor for theoretical and experimental physics at Physics Cathedra, after being chosen among five candidates who have applied for that position.

During the year 1874, as a part of the general reform of education system in the Habsburg Monarchy, a decision has been made to restore higher education at the University of Zagreb with the three-year program of natural sciences and mathematics at the Faculty of Philosophy (Mudroslovni fakultet). After opening of a position for physics professor was chosen best candidate: prof. Vinko Dvořák, a senior lecturer at the University in Prague. Professor Dvořák, who was assistant of Ernest Mach (their correspondence is still preserved), was also world-renowned scientist (e.g. Dvořák-Rayleigh Circulation), and eminent experimenter and creator of new experimental devices. Soon after assuming his new post, professor Dvořák has started a collection of physics experiments and apparatus that has been continuously expanding. Thus in 1896, only six months after the discovery of X-rays, he obtained an X-ray apparatus. Great part of the original collection of Dvořák’s devices is nowadays in the possession of the Department of Physics (moreover, some of the devices are still in use during lecture and demonstrations in course of General Physics) and represents a significant cultural and scientific heritage. Starting in 1885 was the physics curriculum extended to a four-year study course. Professor Dvořák has early in his work founded the Physics Cabinet, from which has later evolved the Physics Division (Fizički zavod).

Due to ever expanding scientific and educational activity, the original Physics Cabinet soon had to be moved from Demetrova Street (now belonging to the Natural Sciences Museum) to Wilson Square (now the Rectorate of the University). Even at this new location were scientific and educational work affected by the problem of limited space, and due to the large number of students (from all of the faculties of the University). This problem was solved only in 1937 with the efforts of professor Stanko Hondl. The Physics Division (Fizikalni zavod) was then moved to the first especially constructed and equipped building at Mažuranić Square (now Marulić Square). Unfortunately, further development of Physics in Zagreb has temporarily been slowed down by the Second World War.

However, as early as 1946, with separation of the Faculty of Science from  the Faculty of Philosophy and with professor Mladen Paić assuming position as of Head of Department of Physics, starts a new era of fast development of scientific and educational work in physics. Teaching of physics was significantly improved by Professor Paić, mainly through establishing a number of practicum, creating new study courses and providing students with manuals and textbooks, while also encouraging scientific work. Professor Paić, along with his colleague Ivan Supek, organized building of the “Ruđer Bošković” Institute premises. Later in time, professor Paić has also initiated building of the University‘s Institute of Physics’ premises (now the Institute of Physics). Existence of these two Institutes, complemented with possibility of specialization abroad, has enabled new generation of physicists from the Faculty of Sciences to partake in the rapid development of physics in the world after the Second World War. Thus, already in the academic year 1947/48, along with existing educational title of “teacher of physics”, has been established new title of “research-and-development” qualification for young scientists. Since 1962 students have acquired this new professional title as “Physics Engineer”. Department of Physics research program has been very successfully producing a large number of world-class physicists as well as the university professors of which many work abroad. 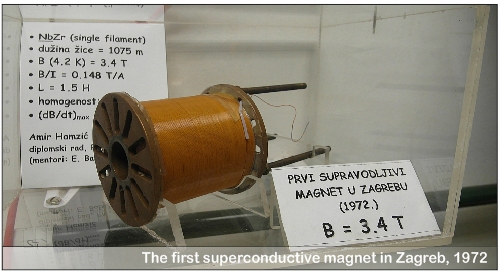 Already during the academic year of 1960/61 has the curriculum been extended to the postgraduate level, mostly modeled according to the studies in the United States and some other western countries. A postgraduate study of physics was carried out in close collaboration with the “Ruđer Bošković” Institute from the very beginning, and later also with the Institute of Physics and other institutions.

Until 1946, the degrees of Ph.D. were acquired in Philosophy with Physics as the relevant branch of science, and based on a dissertation and an appropriate rigorous examination. Nowadays, it is recognized as s doctoral in Physics. Generally, it requires prior publications of several research papers in leading international scientific journals.

As early as 1970’s, part of the graduate and most of the postgraduate courses were conducted at the Institute of Physics and the “Ruđer Bošković” Institute, causing a considerable challenge both to the students and lecturers of the Department. Consequently, prof. Gaja Alaga has gathered a group of colleagues and strongly campaigned for a construction of new building for the Department of Physics at Horvatovac. Significant efforts to secure the authorization and financial means for the new construction were made by then Dean of the Natural Sciences Departments professor S. Barišić, and then Director professor S. Lelas. Professor M. Šunjić helped to secure the funds for the equipment. This project has provided new and adequate space for teaching, student laboratories, research laboratories, library, administration, and for research and teaching personnel.

Moreover, considerable efforts were made to acquire scientific equipment for various fields of Physics. This project was carried out by great efforts of Head of Department at the time, prof. M. Furić, as well as by professors K. Ilakovac, B. Leontić, Z. Ogorelec, V. Paar and D. Tadić. In 1988 the Faculty came in the possession of the site for new building. Its realization, procurement of scientific and teaching equipment and moving into the new building took place in an increasingly dramatic circumstances, that culminated with the aggression of Serbia and Monte Negro against Croatia. In spite of working under dangerous circumstances, the Department of Physics began its work at the new location at 32 Bijenička Street in fall of 1991.

A significant number of practical exercises in the student laboratories have been replaced with new, more modern ones, and new research laboratories have been set up. A computer network has been installed in the building providing connection to the world. In 1993 was established a student administration office at the Department of Physics.

An important step has also been taken by integrating the divisional libraries into a large central departmental library. Some old books, dating back to the original Jesuit Academy, are still in existence (the oldest dating from 1658), as well as a considerable volume  from the time of the Royal Academy of Science that came in the possession of the Physics Cabinet, founded in 1876. Acquisitions of new books were performed continuously by the Physics Cabinet, and from 1920 by the Seminar (Division) for Theoretical Physics. The overall volume of books in the Central Library reaches 15,000 titles and 500 scientific journals in the field of physics. 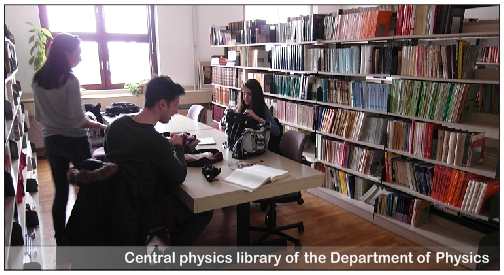 The Statute of the Faculty of Science from 1995 has renamed Physics Division into the Department of Physics. The Department was established as a branch of the Faculty with considerable level of independence, particularly in regard to the process of acquiring doctoral degree as well as the mechanism of election and promotion into academic positions.

Department of Physics at the university level is currently being established as a vocational link between all the physicists at the University.