Doctoral studies in physics are provided by the University of Zagreb, Faculty of Science (PMF)

Doctoral program in physics presents continuation of a long tradition of doctorates in physics at the University of Zagreb. Let us mention the long tradition of Croatian geophysics (the geophysical observatory dates from 1861., with scientists and teachers such as Andrija Mohorovičić), as well as regular lectures in natural sciences at the Philosophical Faculty, begun in 1876., with Vinko Dvořák as the first physics professor at the renewed University of Zagreb.

Physics in Zagreb was among the first in this part of Europe which had postgraduate programs leading to a doctorate, following the internationally recognized pattern. Namely, Professors Ivan Supek and Mladen Paić have introduced lectures for postgraduate students already in the 1950's, as an introduction to scientific research under the guidance of a mentor.

The gradual relocation of the Faculty of Science to new buildings at Horvatovac, in the immediate vicinity of the Ruđer Bošković Institute and the Institute of Physics has created a "natural science park" with new opportunities to organize doctoral studies.

A special effort is made to connect the doctoral studies in physics at the University of Zagreb to those of other Central European universities. 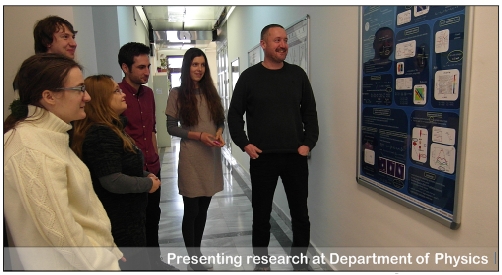 The structure of the doctoral programme