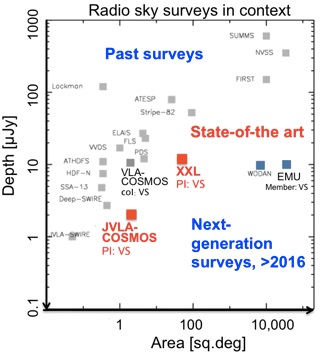 Understanding how galaxies form in the early universe and their subsequent evolution through cosmic time is a major goal of modern astrophysics. Panchromatic look-back sky surveys significantly advanced the field in the past decade, and we are now entering an even more fruitful period - a 'golden age' of radio astronomy - with new facilities delivering an order of magnitude increase in sensitivity, such as the Jansky Very Large Array (JVLA), Australia Telescope Compact Array (ATCA) and Atacama Large Millimeter/submillimeter Array (ALMA).

Two unique, state-of-the-art radio sky surveys with the JVLA (VLA-COSMOS 3 GHz Large Project) and ATCA that will push to the next frontiers, and reveal the mechanisms that shape galaxies over cosmic time are carried out the the University of Zagreb (PI: Smolcic; see Figure on the right).

The ZGal research group focuses on the growth of stellar and supermassive black-hole mass in galaxies throughout cosmic time by: