Today, more than half the world's population live in cities and lot of areas have been urbanized. Urbanization brings many benefits for the society by improving the standards of living, but on the other hand, it is also associated with unwanted environmental, social and economic consequences. One such concern is Urban Heat Island (UHI), the phenomenon characterized by considerably higher air temperatures in urban areas as compared to the surrounding suburban and rural areas. UHI is among most serious environmental problems in cities because it is associated with multiple negative consequences, like overheating of the pavement surfaces, discomfort for citizens, increased health risk due to excessive heat and reduced nocturnal cooling, increased water demand, increased consumption of energy etc. Considering rapid growth of urban population, two important outcomes appear: urban areas are becoming larger and consequently UHI intensifies, and increasing trend of urban population means that more people are affected by UHI each year. 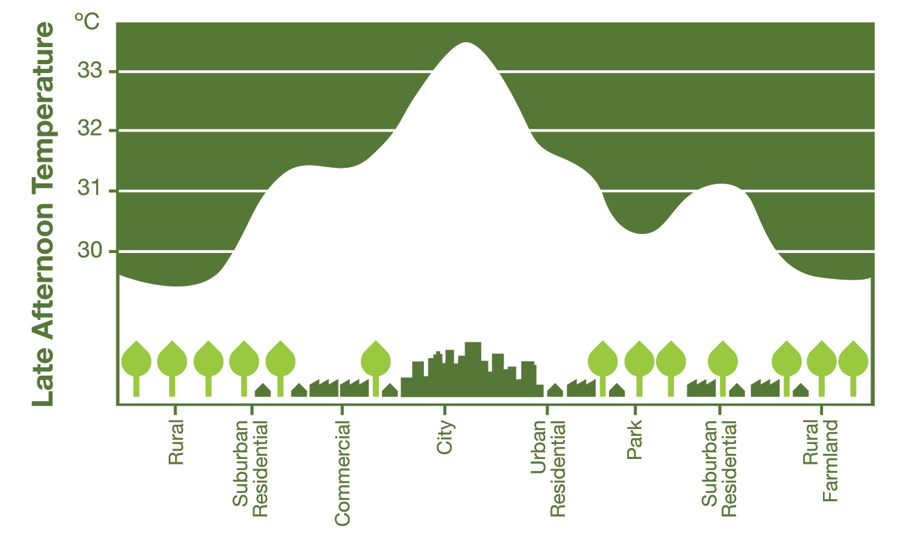 Cities are one of critical areas where the climate change is expected to have severe impacts and UHI effects are directly related to global warming. Although a global phenomenon, climate change with all associated manifestations and consequences are felt locally exerting added stress on urban areas. Expected further increase of global temperatures would strongly influence the habitability of cities with significant impacts on human health, infrastructure, energy supply, water demands and ecosystems. Moreover, interaction between urban micro-climates and large-scale climate variability (e.g. heat-waves, North Atlantic Oscillation, El-Niño Southern Oscillation) may amplify the UHI effect and therefore increase the heat stress leading to more unpleasant urban environment for its inhabitants with potential negative economic, health and social consequences. Urban areas are highly vulnerable to climate change, but on the other hand, they also have great potential for adaptation and mitigation with a sustainable development as a main goal. This can be achieved by development and implementation of effective urban climate change policies and programs based on sound scientific knowledge.

Climate variability and manifestations of climate change in Croatia with potential impact on urban environment are in the focus of this project. The proposed project addresses to two main topics, which can be distinguished one from another, and yet, interact one with another:

1.) Urban climate in Croatia and urban climate modelling. This part of the project will consider urban climate in different Croatian cities. Modelling approach is expected to enable analyses of the urban climate as well as to estimate the potential for integrating of green and blue infrastructure in urban environment as mitigation measures for reducing UHI effects. The modelling will be performed by using a state-of-art urban climate model (MUKLIMO_3). Impacts of different types of vegetation and open water surfaces on urban micro-climate will be considered. Also, possible future changes in UHI load will be examined taking into account regional climate projections and urban morphology.