On 31 March 2021 the fifth video meeting was held via ZOOM. Researchers from four institutions (IOR, PMF-ST, PMF-ZG and DHMZ) discussed the realisation of scientific objectives planned for the current period (12/2019–04/2021). Also, they discussed realisation of the financial plan as well as preparation of a periodic report.

A scientific cruise was conducted with research vessel BIOS DVA in the Middle Adriatic In the period 1 – 4 August 2020. On this occasion researchers downloaded sea temperature, pressure and oxygen data from moored loggers at three locations (near the islands of Jabuka, Blitvenica and Balun). The loggers were cleaned, calibrated and returned to the sea for the next cycle of measurements. Temperature, salinity, dissolved oxygen and chlorophyll were measured around Blitvenica and Jabuka islands, and along the transect from the coast to Jabuka island. This was carried out with CTD probe (SBE25) mounted on undulating vehicle. Profiling was performed in a surface layer (up to 45 m) with high spatial resolution – about 10 cm in the vertical and 200 m in the horizontal direction. Details on the cruise can be found on Facebook page (in Croatian) Gefizika uživo.

The second meeting was held on 28 October 2019 in Split (IOR). Researchers from Zagreb and Split discussed several topics:

The second video meeting was held on 5 September 2019. Researchers from Zagreb (PMF-ZG and DHMZ) and Split (IOR) discussed realisation of project objectives and upcoming activities (objectives, cruises and meetings). 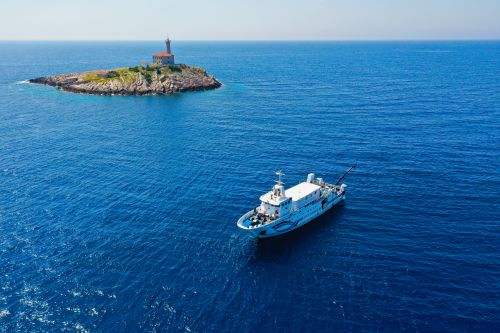 In the period from 3 to 7 June 2019, a team of researchers from the MAUD project deployed temperature loggers on the submarine rocks in the area of the Jabuka island. Also, an air-pressure logger was installed on the Jabuka. Loggers for dissolved oxygen (DO) were deployed in the area of Blitvenica and Balun islands, while near Jabuka they will be set up during the next field trip. In addition, the first testing of combined work of CTD SBE25 and undulating vehicle was performed. Testing began in the canal between Čiovo and Šolta and continued, with several modifications, around Jabuka, and on the transect towards and around Blitvenca. This allowed high-resolution measurements of not only temperature and salinity, but also dissolved oxygen and chlorophyll.